It's always a difficult time when we lose someone. It can be hard to know what is expected of us during this time and how long a Greek Orthodox funeral might go on.

This article will let you know exactly what to expect from start to finish.

In the Greek Orthodox Church, laying the dead to rest involves a particular set of rituals, customs and rules of conduct.

Funerals and burials are organised quickly, usually within 24 to 48 hours, reflecting the Greek Orthodox acceptance of death.

If you do not belong to the Greek Orthodox faith, you might be unaware of what to expect during these solemn ceremonies.

Greek Orthodox Christian believe that death leads to the separation of the body from the soul.

They believe that when Christ comes again to the world, the final judgement will be delivered to each soul, which would result in it spending eternity in either Heaven or Hell.

The Greek Orthodox funeral is considered a severe ritual that takes anywhere between 30 minutes to an hour.

Attendees of the funeral are expected to dress appropriately, often dark and sad clothing for women and dark jackets with ties for men.

Greek Orthodox funeral services are typically open caskets if the state of the deceased's body allows it to be so; however, viewing the body is entirely optional and up to the guests.

Guests at the funeral service often greet the families of the deceased and provide their condolences by saying the phrase "memory eternal" or "may their memory be eternal" or "may you have an abundant life". 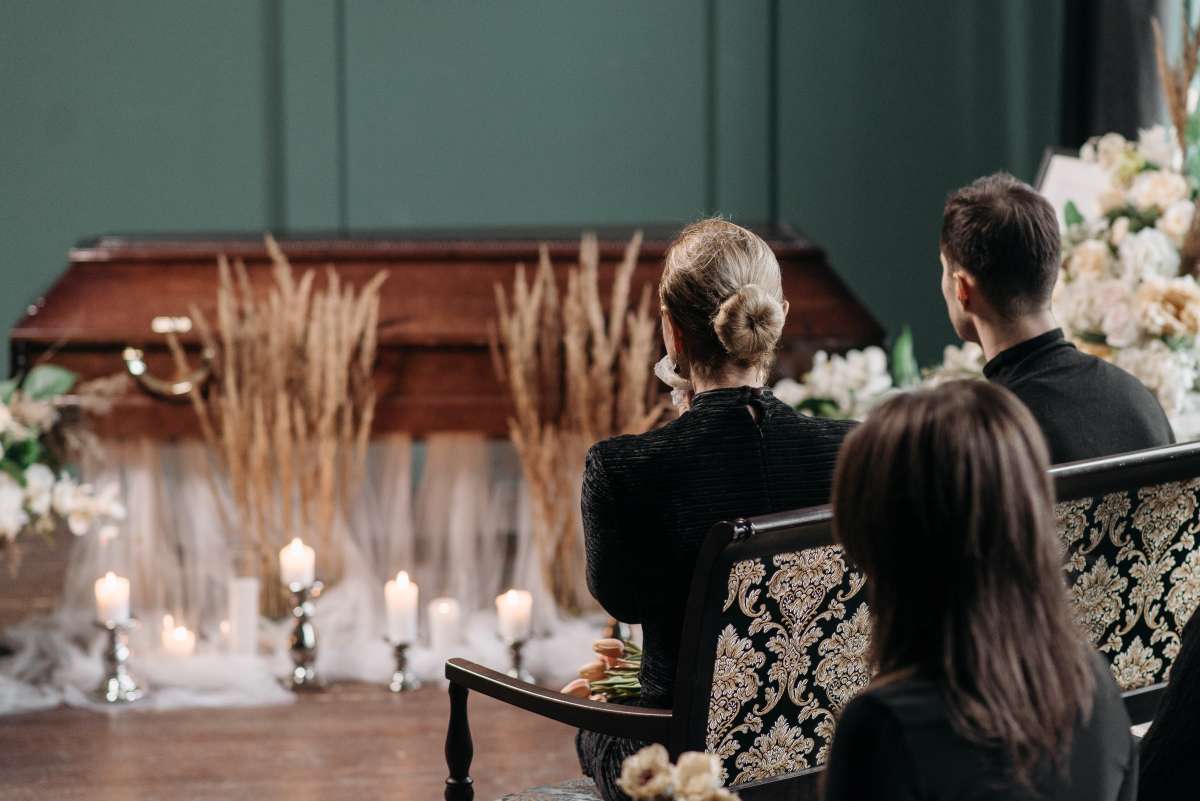 The Trisagion the night before the Funeral Service is usually held at seven or 7:30 pm; the Trisagion is a quick service, no more than ten minutes in length.

During this Service – as at the Funeral Service the next day – we pray that the Lord will grant forgiveness of sins and rest to the soul of the deceased "in the bosom of Abraham" (Luke 16:22-23) with Christ and the saints where "there is no pain no sorrow and no suffering" (Revelation 21:4).

The Orthodox Funeral Service is held at the Church (usually 10 or 11 am) and usually is about an hour long. Peter Tziotzis Orthodox Funerals will always find creative ways to pull costs in line with your budget.

The Funeral Service consists primarily of the singing of verses from Psalm 119, a series of hymns on the meaning of life and death composed by St. John of Damascus (676-749AD), Scripture readings from St. Paul's First Letter to the Thessalonians 4:13-18 and the Gospel of John 5:24-30 and a brief homily/eulogy by the Priest.

Important Note: The tradition as Orthodox Christians is that only the Priest offers the homily/eulogy during services in Church.

Family members and friends who wish to speak and share memories may do so at the Makaria.

In the Scripture readings, prayers and hymns of the Funeral Service, a dramatic dialogue occur between God, the deceased and everyone in attendance.

The Service acknowledges the painful realities of human existence and the frailty of life yet reminds those present of God's infinite mercy and love. It asks that we "ponder how brief our life is" but also speaks of the power of the Risen Christ, the Kingdom of God, the Resurrection of the dead and immortality.

After the Service, everyone present is invited to come forward to kiss an icon of the Resurrection and offer their final respects to the deceased.

After the congregation and family have offered what the Funeral Service calls "the final kiss" to their loved one, the Priest anoints the deceased's body in the form of a cross with oil and earth, reciting several verses from the Scriptures.

During the anointing with oil, the Priest says: "Wash me with hyssop, and I shall be pure; cleanse me, and I shall be whiter than snow" (Psalm 51:7); and then, with the placing of earth, he says: "The world is the Lord's and the fullness thereof.

The Trisagion Service for the Departed 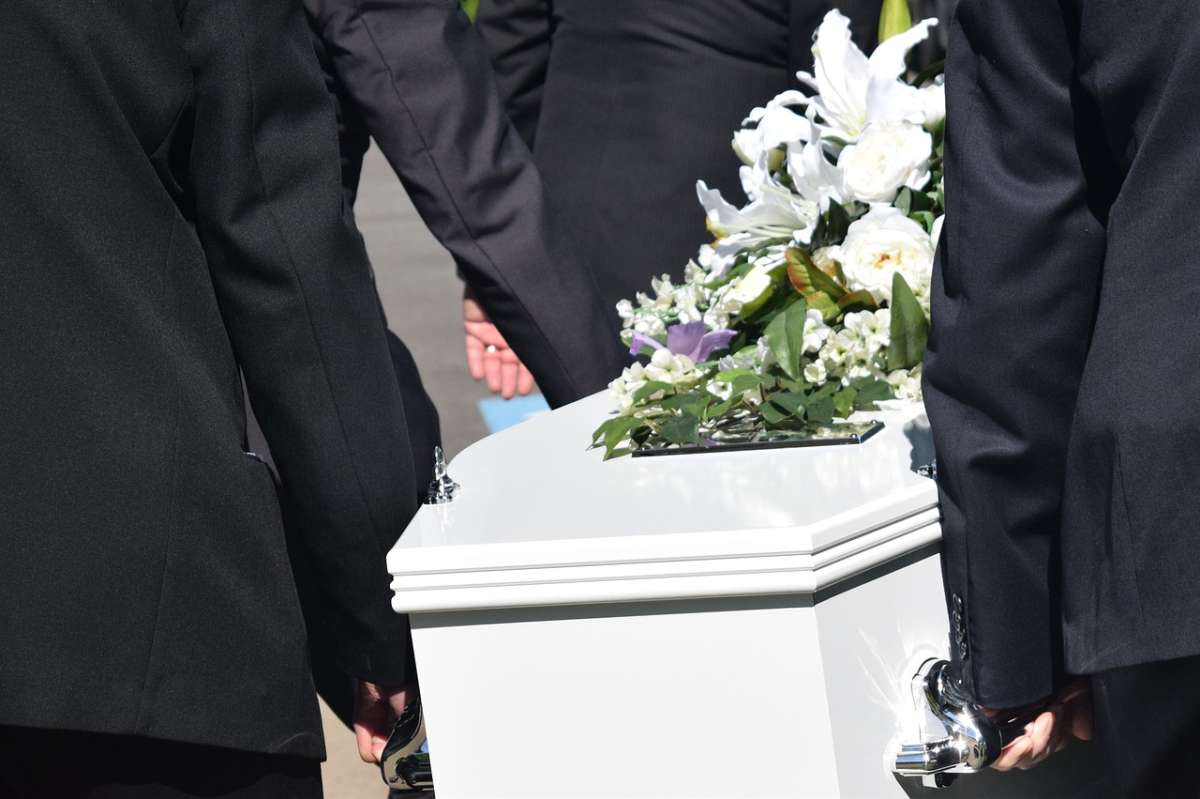 The "Trisagion Service" is a brief service chanted and performed by the Priest for a person who has died. The Service is often performed at the following times:

(After the Trisagion, just before the coffin is lowered into the grave, the Priest pours oil crosswise on the departed, saying, "Sprinkle me with hyssop, and I shall be pure; cleanse me, and I shall be whiter than snow." He then casts sand in the grave, saying, "The earth is the Lord's and the fullness of it, the world and all that dwell in it. You are dust, and to dust, you shall return." Peter Tziotzis Orthodox Funerals will always find creative ways to pull costs in line with your budget.

On the fortieth day, the family and the Priest go to the cemetery to perform the Trisagion.

Similarly, at the third, sixth, ninth and twelve months and annually, a Memorial Service is performed in the Church and a Trisagion at the cemetery.

(In Greece and Australia, Saturdays of the souls are also usually on the Saturday before Cheesefare Sunday and the Saturday of the first week of Lent.)

On Saturdays of the Souls, a Mnimosino occurs at the Church for all who have passed away.

At the Memorial Service (Mnimosino), the family brings to the Church "Kollyva"- i.e. boiled wheat mixed with sugar, sultanas, etc.

At a Trisagion, the family may, if they wish, bring Kollyva to distribute to the people after the Service.

(The practice of throwing the plate of Kollyva into the grave and breaking it is not a Christian practice or custom of the Church, and therefore it is discouraged).

According to ancient practice, the ninth day "as a reminder of the living and the dead" and "on the fortieth day."

(The people of Israel mourned for the great Moses in this way.) St. Symeon of Thessaloniki interprets these crucial days as: "The three day Memorial we do for the Holy Trinity because from the Holy Trinity we have our existence and our life.

The nine-day Memorials remind us of the nine orders of holy Angels, among which our beloved one has been numbered.

The fortieth day Memorial is for the Ascension of our Saviour. The three-month, six-month and nine-month symbolise the Holy Trinity".

The "Kolyva" (boiled wheat) also have their symbolism in the Church. The boiled wheat kernels express belief in everlasting life.

Just as new life rises from the buried kernel of wheat, so the Church believes that the one buried will rise one day to a new life in God.

The wheat is covered in sugar and sultanas to symbolise the bliss of eternal life in Heaven.

The Trisagion Service Is as Follows:

It begins with the familiar Trisagion prayer: "Holy God, Holy Mighty, Holy Immortal, have mercy on us."

Indeed the Service is named Trisagion because it begins in this way.

Then follows a petition to the Holy Trinity and the Lord's Prayer. Then come four hymns:

Then follow several petitions and a prayer by the Priest to remission the sins of the departed.

Then the final blessing, in which we ask God to grant the departed "rest in the bosom of Abraham, Isaac, and Jacob."

The closing exclamation, "May your memory be eternal, our brother, (or sister), worthy of being deemed happy and ever to be remembered." 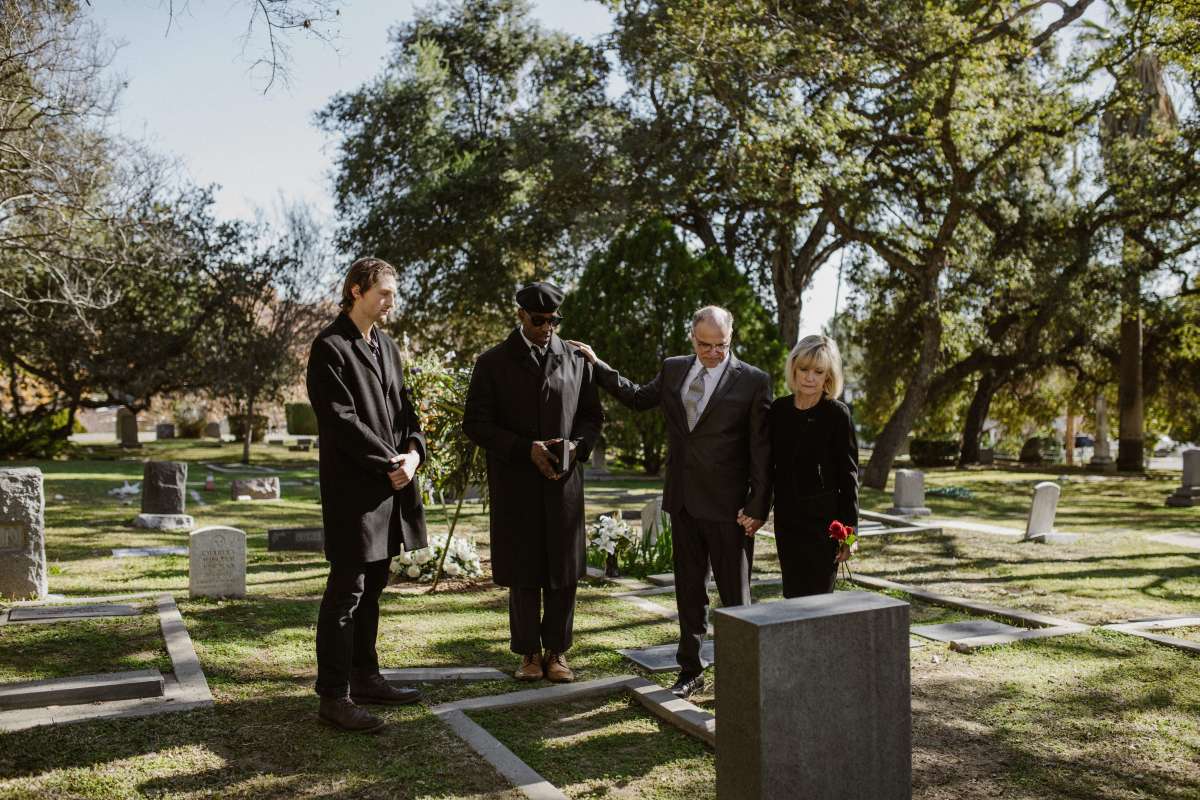 After the funeral, the Priest and mourners gather at the cemetery.

Burial is preceded by a Trisagion service, an abridged ceremony consisting of closing hymns from the funeral.

Following the hymns, the Priest bestows final blessings on the casket. Mourners may stay during the lowering of the casket.

They often toss flowers and soil into the grave. In the Greek Orthodox faith, a burial site faces east.

Cremation is not allowed. After the burial, mourners gather for a luncheon called the Makaria, in which fish is served.

The fish is an ancient Christian symbol; it also serves as an acceptable main course during periods of mourning.

The Makaria is an appropriate time for loved ones to share their remembrances. It is not suitable to serve desserts or bring flowers to the Makaria.

Guests may visit the family after the funeral and burial. Light refreshments are shared among friends and loved ones. Wine, brandy, coffee and biscuits called paximathia are most commonly served.

On the third day after death, the priest and family members visit the grave. Greek Orthodox Christians believe that the soul lingers for three days after a person dies.

Beside the grave, the Priest blesses a plate of boiled wheat called koliva and scatters it in the wind.

The plate is then ritually broken on the tombstone, symbolising the soul's release from the body.

An official mourning period of 40 days follows. Within this period, it is not advisable to bring flowers or sweets when visiting the family.

The 40 days of mourning are based on the time between Christ's Resurrection and ascension.

For 40 days, mourners abstain from social life, especially parties and other festivities. It is not uncommon to extend the mourning period up to six years. Widowed mourners may choose to dress in black for their entire lives.

On the last Sunday of the 40-day mourning period, another memorial service is held at the cemetery, commemorating the soul's ascent into Heaven.

After this Service, friends and family gather for coffee, brandy and cakes, along with koliva mixed with parsley, nuts, pomegranate seeds and sugar.

Each ingredient of the koliva dish has a symbolic significance. Memorial services follow again after three and seven years.

Memorial charity is a time-honoured tradition in the Greek Orthodox Church. People often donate money to the Church in memory of the deceased or contribute to ministries or parish projects.

The immediate family usually takes the week after the funeral off work, and family members welcome people into their homes for a short visit.

Vigil candles and incense are lit to signify the presence of their loved ones, and it's a time for reflection and prayer.

Commemoration services usually take place a week following the funeral. This Service is almost identical to the funeral service — without the casket present.

The funeral readings and psalms read at the funeral and Trisagion are also in this Service. There are several Commemoration services after someone dies.

These memorial services occur one week, 40 days, and one year after the death. Some families and church communities also host annual memorials in the person's honour.

The first commemoration that takes place is a gratitude service. Attendees state their gratitude to God for granting eternal life to the deceased.

This Service exhibits their belief in the continuation of life after death.

The 40-day memorial mark is significant because it represents when Jesus rose from the dead. Families will usually gather at the Church, gravesite, or a family member's home. This is a time to pick and let go of grief as a community.

Even though their religion believes in an afterlife, they recognise grief and the need to process it.

The grief doesn't go away after the 40th day, but it brings a sense of peace because it keeps the memories and stories alive.

The 40-day Memorial serves as an active grief process. The community shares stories and expresses its grief and praises out loud. Here at Peter Tziotzis Orthodox Funerals, we provide Orthodox funeral services.

This is a unique way to celebrate life and turn toward grief instead of dismissing it. They make space for suffering, which in turn brings healing.